The house was built due to the long series of incredible and unexpected coincidences: Vlado Milunić lived in a neighboring house, which belonged to Havel´s family. In 1986, deep in the totality, Václav Havel (then the enemy of the state no. 1) asked him by chance to handle a project of distribution of their apartment in two parts for two brothers. The reconstruction was carried out with the assistance of the secret police. When adjusting the apartment Frank and Václav also naively talked about the fact that it would be amazing if on adjoining plot, which was bombed by the end of WWII, stood a house dedicated entirely to the culture. Then a miracle happened – the Velvet Revolution. And thanks to this historic event Václav became president of the state. Based on a random mention of president Václav, Vlado Milunić received an order to study the corner house with cultural content. He wished the house, which was based on the Velvet Revolution, was its reflection. Therefore, he suggested object composed of two parts, static and dynamic, just like a society, within which its smaller part separated from the statically rigid totalitarian mainstream and released into a world of changes. The project was admired by a friend of Vlado Milunić – Pavel Koch, who happened to be in Prague as a representative of the Dutch company Nationale Nederlanden. For tactical reasons we accidentally got for the realization of the building a suitable partner, architect Frank Gehry. Thanks to another chance, two architects from the opposite ends of the globe built up in a rare concert for Dutch guilders a breathtaking brave gift in Prague which has become a positive symbol of the city - a dance over the end of totalitarianism.

Dancing House is remarkable and magnificent building which has become an integral part of Prague. There had been free space on the corner of Rašín´s waterfront and The Square of Jirásek since 1945. The house, which stood here, was destroyed on February 14 in 1945 by the bombs of US aircraft when the Americans mistook Prague with Dresden. After the final clearance of debris in 1960 the former government had been arguing about the purpose of this place for more than 30 years.

Dancing House was designed by Croatian architect Vlado Milunić along with Frank O. Gehry and British architect of Czech origin Eva Jiřičná. As a result of this cooperation a real masterpiece, which in its concrete structure harbors nine floors and twofloors underground, came into being.

Nowadays, the building serves as a newly opened luxury hotel, which offers 40 luxurious rooms with unforgettable views of Prague Castle, a café and a top-floor restaurant. At the top of the house you will find amazing panoramic terrace where you can admire the city and its skyline view.

Building gained its name thanks to the towers that resemble famous figures of dancers, Ginger Rogers and Fred Astaire. A stone tower represents dancer and a glass tower his female partner. At the top of the tower symbolizing the dancer there is a dome with the construction of metal tubes coated with stainless steel mesh-work. The dome is shrouded in imaginary hair and symbolizes the head of jellyfish.

Dancing House was opened in 1996 and the same year won the prestigious award of US magazine Time in the category of design of a year. Equally important is the fact

that Czech National Bank allowed to portray Dancing House on commemorative coins as an example of present building for the cycle “Ten Centuries of Architecture”.

Dancing House has belonged among the controversial constructions of modern architecture in Prague which originated in the nineties. 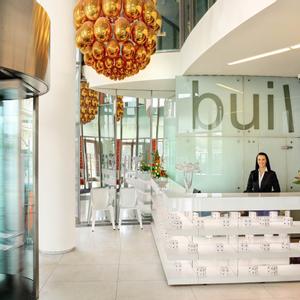 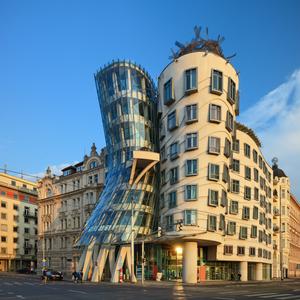 Night in Dancing House with a bottle of Champagne in price

Stay at the Dancing House with romantic dinner from Ondrej Slanina

from€130
Book now
See all offers 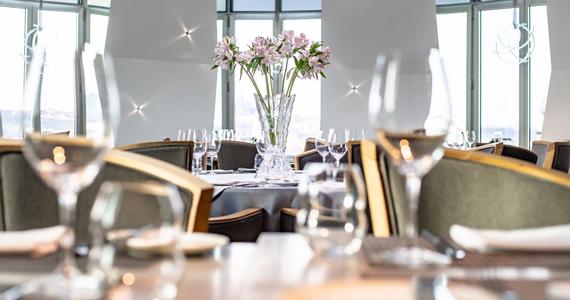 Try a combination of great taste with a unique view and stylish interior.
See more 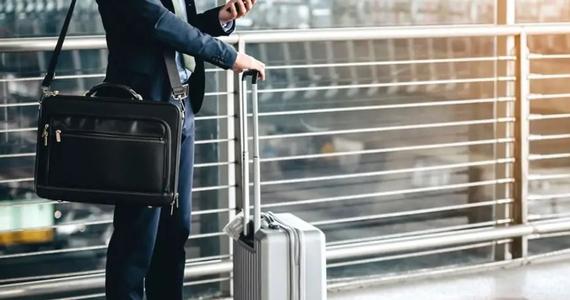