Prague „Central Park“ – There is a lot of marked trails suitable for in-line skating, cycling, jogging and other sport activities.

The largest cathedral in Prague and a spiritual symbol of the Czech state - Major landmark of Prague Castle and the largest and most important temple in Prague. Czech Crown Jewels are kept in the chapel of St. Wenceslaus.

The most beautiful building of Czech baroque - St. Nicholas Church is often regarded as the most impressive building of Baroque and also is one of the finest Baroque buildings in Europe.

Beautiful view of Prague - one of the nicest views of the historic city. You will see famous Prague bridges and towers as well as countless churches and cathedrals from a bird´s eye view.

The second most valuable treasure in the Czech Republic and the famous chimes - Loreta treasure with a diamond monstrance with 6222 diamonds is kept here. Loreta chime with 30 bells plays every hour.

The most famous theatre in the Czech Republic and a masterpiece of Czech architecture of the 19th century. It was ceremoniously opened on the 18th of November 1883 with a performance of Smetana's most famous opera Libuse.

A steep path beneath the garden of Eden - New Castle Stairs rise up under the southern gardens of Prague Castle. A steep carriage road called „Steep Path“ led through this place in the Middle Age.

A hill of lovers –flowering cherry orchard in Petrin is visited by crowds of lovers on the 1st of May, yet until the 14th century Petrin served as the scaffold.

Try a combination of great taste with a unique view and stylish interior.
See more

Night in Dancing House with a bottle of Champagne in price

Stay at the Dancing House with romantic dinner from Ondrej Slanina

from€130
Book now
See all offers 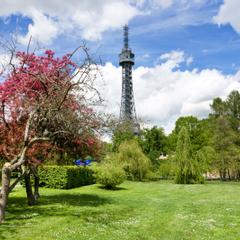 Welcome treatment upon arrival, Wi-Fi connection, Mini Bar and Coffemaker in all the Rooms and Suites

Best Price Guaranteed, just if you book on our Official Website 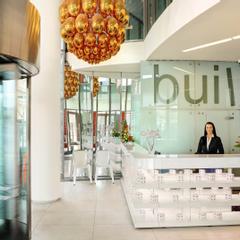 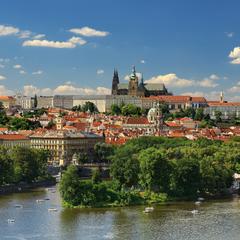